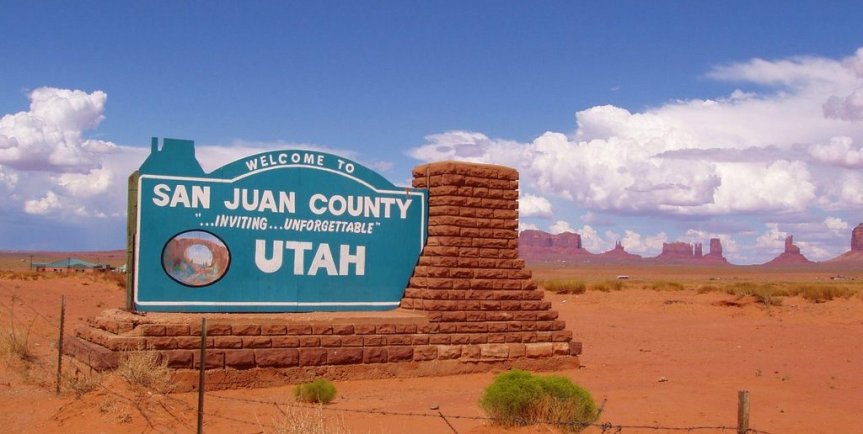 Numerous court battles waged by and against San Juan County over the last few years may be coming to an end. According to Utah Sen. Ralph Okerlund, R-Monroe, the county’s legal expenditures related to voting rights, Bears Ears National Monument, right-of-way claims, and other issues have “left the county really broke.”

Okerlund made the statement at the Utah legislature last week where he joined San Juan County Commissioner Bruce Adams in asking the state for $1.5 million in appropriations to help lessen the impact of the $3 million in legal bills the county has racked up over the last few years.

The previous San Juan County commission, which Adams served on with former commissioners Phil Lyman and Rebecca Benally, became embroiled in a number of court cases during its term. The county fought two voting rights cases with the Navajo Nation during the same years that Bears Ears National Monument was created by President Obama and then reduced by President Trump.

In 2016 and 2017, the county’s general fund dropped from $9 million in reserves to $5 million, in large part due to legal bills. In 2018, the county involved itself in several more lawsuits that led to another $1 million in costs. And up to $3.2 million in outstanding legal fees from an ongoing voting rights case have yet to be assessed, which could bring the total to over $6 million.

“[The county] spent over $3 million in legal fees defending themselves in court over the last couple years,” Okerlund said at the subcommittee hearing.

“It’s really put a burden on us over the last couple of years, the number of lawsuits that we’ve had filed against the county on various issues,” echoed Adams.

The appropriations request itemizes seven cases, four of which were filed against the county (mail‐in‐ballot, redistricting/gerrymandering, Attorney General vs Sheriff Eldredge, and Willie Grayeyes vs San Juan). The other three were initiated by the county (the RS 2477 right-of-way case in Recapture Canyon and two Bears Ears National Monument cases, the latter of which appear to be rolled into a single item on the appropriations request).

As early as the spring of 2018, both Adams and Lyman indicated they were concerned the county could go bankrupt. Shortly thereafter, the county moved to intervene on a Bears Ears lawsuit. It also spent $327,000 spent defending County Clerk John David Nielson’s decision to remove now-Commissioner Willie Grayeyes from the ballot. Grayeyes sued the county and won in court in August 2018.

Steve Boos, the attorney who represented Grayeyes in the residency case and the Navajo Nation in the redistricting case, said, “How did it become an obligation of the taxpayers in the state of Utah generally to cover the cost of really bad decisions on the part of the old county commission?”

Rep. Brian King, D-Salt Lake, said, “To some extent I find myself thinking that this is something that folks over time in the past have brought upon themselves, and I’m not sure I feel so good about asking state taxpayers to bail out bad decisions that have been made.”

King went onto say that he was sympathetic with RS 2477 claims the state has to routes and roads throughout Utah. But he noted that the state is already paying for its own lawsuit related to thousands of miles of RS 2477 routes, and questioned why state taxpayers should also pay for San Juan County’s similar suit to gain a right-of-way in Recapture Canyon.

The state was also involved with fighting Obama’s designation of Bears Ears, but San Juan County paid $616,000 to conduct its own legal research into the designation and to intervene on behalf of the Trump administration when it was sued for reducing the monument.

“I’m not at all comfortable that what we’ve got is a coordinated vision of what kind of money we’ve put into this. We’ve got to make some tough decisions about scarce resources,” King said.

Sen. Curt Bramble, R-Provo said, “Make the case for the single mom on a fixed income that her taxes have to pay for the decisions of San Juan County.”

Adams argued that these legal battles were of statewide importance, and therefore, he said, “We think it’s fair for us to pay half of that…and to ask the state for a $1.5 [million] allocation.”

In an interview with the Canyon Echo on Tuesday, Adams elaborated, explaining that most of the state participates in vote-by-mail, so the state should have an interest in helping San Juan County with the costs of its vote-by-mail suit. The Navajo Human Rights Commission sued the county in 2016, claiming that polling places had been closed ahead of the 2014 election. The county later settled though Adams thinks it would have won if the case had been brought to trial. The settlement, in Adams’ words, made the county agree “to do everything we were already doing,” such as providing Navajo interpreters at polling stations and running Navajo language ads on the radio.

At the subcommittee meeting, Rep. Angela Romero, D–Salt Lake City, said she was puzzled why the state should pay for half of the Willie Grayeyes vs. San Juan case. “Why would we as a legislature even touch that?” she asked.

Adams told the Echo the Grayeyes residency case went to court because the state law on residency is poorly written, and clearing up its interpretation is of value to the state as a whole. “The law stated what residency meant, and we thought we understood the law,” he said, “but it was vague enough that we lost the case. If we were trying to follow the law and we lost the case–we didn’t write the law–is it our fault that we have to incur all of these costs? If the state didn’t write a clear and defensible law, then they are culpable in whole process in my opinion.”

But Judge David Nuffer, who heard the Grayeyes vs. San Juan case in August 2018, did not rule on Grayeyes’ residency or the state law that defines residency. He instead ruled that Nielson had acted improperly to backdate a document in order to make a citizen’s complaint against Grayeyes valid. (Adams said, “I think that [the backdating] was totally innocent and a result of the naïveté on the part of the clerk.”)

The second Grayeyes residency trial did address the state’s residency law, but it was filed by a private citizen in late 2018, not the county. Judge Don Torgerson of the Seventh District Court in Monticello ruled in January that Grayeyes was a Utah resident under the state law. The petitioner, Kelly Laws, has appealed the ruling to the Utah Supreme Court.

Adams appeared to be conflating the two Grayeyes cases when he told the subcommittee, “We [the county commission] felt like the only way to get resolution was to maybe get a judge to look at it. And the judge has looked at it and made his decision and we accept that.”

A suit brought by a former San Juan County sheriff’s deputy, who accused then-Sheriff Eldrege of firing an unloaded weapon at him, cost the county $227,000 before it was dismissed.

Not mentioned in the appropriations request is a pending $3 million bill that could potentially double San Juan County’s legal expenses. The expenses come from the redistricting lawsuit first brought by the Navajo Nation under the Voting Rights Act in 2012. After the county turned down numerous, less-costly settlement offers from the Navajo Nation’s attorneys, a federal court found the county had gerrymandered its voting districts along racial lines and ruled the districts be redrawn by a special master in 2017. The county appealed the decision to the 10th U.S. Circuit Court of Appeals where the case has been on the docket for over a year. If the appeals court upholds the lower court’s ruling, the county could be forced to pay plaintiff’s fees in accordance with the Voting Rights Act.

Because the county appealed, the fees were never assessed under the last commission’s term, and the county’s first majority-Navajo commission, which was elected thanks to the redistricting, could be asked to bear the cost of the previous commission’s alleged gerrymandering.

“It puts the [current] county commission in a uniquely awkward position,” said Steve Boos, “and I always wondered if the old commission was doing that deliberately,” adding that he was speculating on the latter point.

According to a breakdown of the county’s legal defense costs in 2018 alone that were made public via GRAMA request, the county spent $627,000 on outside legal counsel. Suitter Axland, the firm representing the county on the redistricting case, was paid $283,500. JW Howard Attorneys was paid $114,500 for the RS 2477 suit. Durham, Jones, & Pinegar was paid $81,000 to defend the county in the first Grayeyes case. And Holland & Hart was paid $31,000 for sage grouse litigation.

Election Data Services, the county’s sole expert witness in the redistricting case, was paid $108,000 over the last two years to, in part, draw district maps which the court later found to be illegal. The court then brought in special master Dr. Bernard Grofman to draw the maps, which cost the county another $57,000.

The appropriations request could go to vote this week.