Grayeyes will retain his post on the San Juan County commission

The challenge to Grayeyes’ candidacy was brought by Kelly Laws, Grayeyes’ Republican opponent in the November election, on December 28, 2018.

In a nine-page order, Torgerson said Laws — who testified at trial that he knew about the challenge to Grayeyes’ residency in March 2018 — did not act in a timely manner to file his complaint.

The judge also cited Grayeyes’ testimony at he spends between 60 and 80 percent of his time at family members’ homes in Navajo Mountain, Utah, which is geographically isolated from the rest of San Juan County.

Torgerson wrote, “[Grayeyes] is connected to San Juan County as deeply as any resident of the County. In practice, he has always participated in the voting process in San Juan County. And his rich cultural history adds to his connection.”

The judge noted that Grayeyes observes traditional cultural practices, adding, “He may stay on Piute Mesa under a shade hut during the summer. Or at his daughter’s cabin. Or at his sister’s house in Navajo Mountain. As long as those all fall within a single voting precinct, that geographical area is sufficient to be a principal place of residence.”

Grayeyes will be awarded “reasonable costs” under the ruling.

The decision will allow Grayeyes to remain a member of San Juan County’s first majority-Navajo commission.

This story will be updated. Click on the image below to read the ruling and order. Click here for an account of the trial and here for a Canyon Echo editorial on the case. 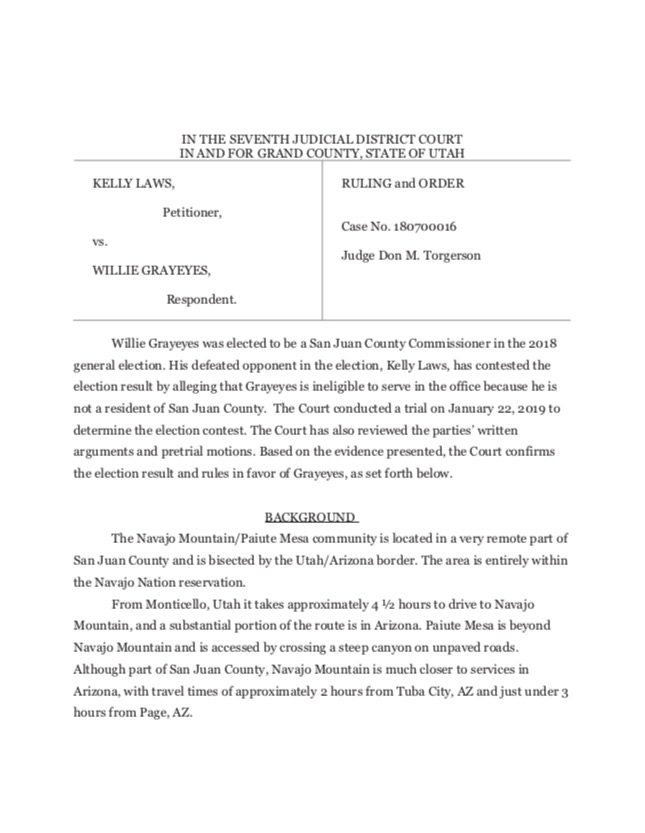